After some quiet days at home I recovered from the exhausting concrete jungle called Tokyo and devoted some time to see through my pictures. Here are some I took in Kyoto on August 22. This was my second visit to Kyoto, and I still have some pictures waiting from the first time I was there. I wont upload them chronologically though, but rather make a different post for each location I visited. This post is about the stone garden of Ryoanji, a zen-buddhist temple in the northwest of Kyoto. I wrote an essay about the architecture of its garden once at university, and I really wanted to see it with my own eyes.

The garden was presumably constructed by a famous Zen monk called Soami, but this fact has not been thoroughly proven yet. The technique used for its construction is called karesansui, which roughly translates to “dry mountain and water landscape”. The garden consists of a rectangular field of small raked pebbles, on which 15 stones of different shapes have been placed in groups of five, two, three, two and three, some of them surrounded by mossy mounds. There are no other plants except for the moss in this garden, but there are other karesansui gardens where small trees and other plants have been used or the use of vegetation has been entirely omitted.

The choice of the stones and their placement follows a list of rules, or rather guidelines, which derived from various characteristics of zen aesthetics. The placement according to these guidelines creates a certain tension in the empty spaces between the stone groups, which ultimately leads to the impression of appropriateness and balance in the observer.

I have to note here that I wrote this last part entirely from my memory, because I don’t have the essay I wrote with me, so I’m afraid I can’t elaborate any further without running the risk of making serious mistakes. Maybe the pictures can speak for themselves. 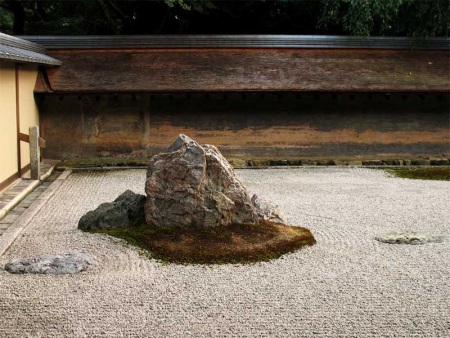 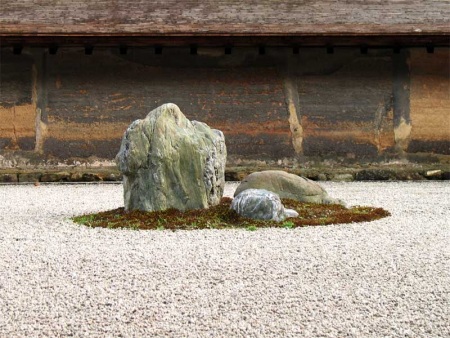 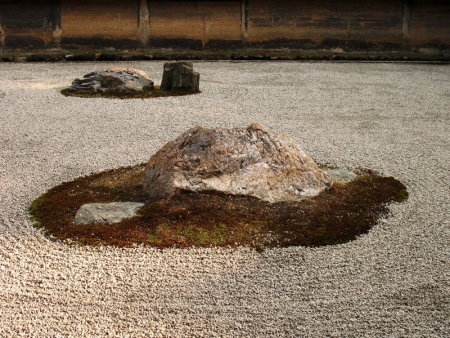 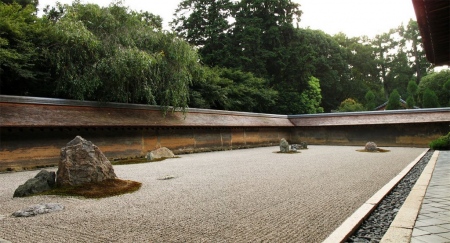 For your information, I have included a picture you probably wont see in the travel brochures. The place was crowded with tourists, which does not exactly help to create a contemplative atmosphere. 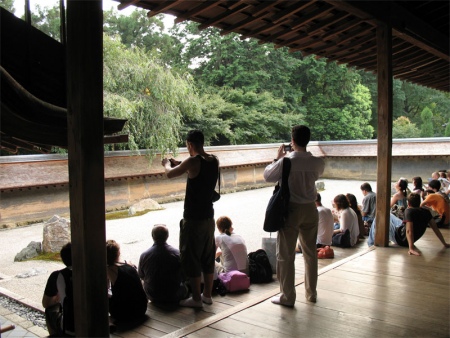