There we go again. It’s been another year of zero contributions by me to my own website. *sigh*

Now, I never wrote this here, but I’ve been playing the infamous MMORPG World of Warcraft almost since the game was released in Europe. There, it’s done, I said it. Admittedly, the excitement wore off after a while, and now I rarely log on to the game anymore if there isn’t a big new content patch or something similar going on. I do, however, still enjoy designing and re-designing my user interface for the game. Blizzard has been very open to the question of UI customisation, and nowadays there is a wide range of AddOns developed by enthusiastic players all over the world. While I lack the skill to write AddOns myself (which requires in-depth knowledge of LUA coding), I use many of them to build my own UI, and sometimes I even modify the .lua files to change some small things in them.

So, while I don’t have anything really exciting to post here, I’ll show off a screenshot of my current WoW UI… here it is: 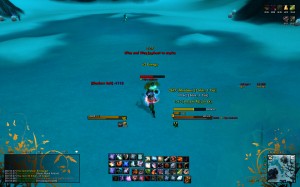 This is what my UI looks like while fighting.

See you next year! 😛